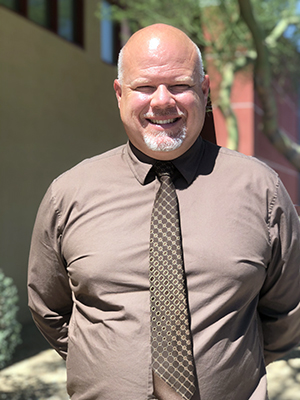 Mr. Hall is a true jack of all trades. His educational degrees include an associate degree from Chandler-Gilbert Community College, a BA in Liberal Studies with an emphasis in Biology, and an MA in Coaching Athletic Administration. His career background includes 20 years with the Phoenix Police Department and two years as a paraprofessional.

While with the Phoenix Police Department, Mr. Hall spent time as a patrol officer, bicycle officer, a crime-free multi-housing officer, and an academy tactical trainer. He earned his detective certification and attended several SWAT schools. Early in his career, Mr. Hall was the police advisor for the Explorer program, where he served as a mentor to youth interested in a law enforcement career. Later in his career, Mr. Hall spent 13 years as an instructor teaching every topic you can imagine at the police academy—new-recruit training, in-service training, physical fitness, ballistic shield, firearms, rifle, high-risk vehicle stops, driving, and the list goes on! In addition to his professional career, Mr. Hall has also coached soccer for twenty years—everything from little league to junior college and several high school teams.

Mr. Hall doesn't view his new job at CAVIT as much of a transition. In fact, including his time teaching at the academy, he's already spent the last thirteen years as an instructor. Additionally, when Mr. Hall first retired, he spent two years as a paraprofessional (a teaching assistant) at a high school in the special education department. He says, "I'm excited to get back to teaching. As a paraprofessional, I got to teach a little bit, but just to get back in front of the classroom and start teaching is something I always thought I'd do once I retired from the police department. It's why I was an instructor for thirteen years—I love teaching."

The new program Mr. Hall will be teaching at CAVIT is a result of dividing the previous law enforcement program into two separate classes: forensics/CSI and criminal justice. Mr. Hall explains, "CAVIT was already hitting on the topics under the criminal justice umbrella, but now they're honing in on the forensic science/CSI part of it and making it its own class." He adds, "We'll still cover some of the same topics as the criminal justice classes. But, we'll go a lot deeper and more involved in learning about the careers specific to our field."

In the new forensics/CSI program, students will have the opportunity to obtain security guard certification and OSHA 10-hour general industry and CPR instruction. In addition, students will receive the educational foundation and experience necessary to pursue additional education and careers in criminal justice and law enforcement such as CIA Investigator, autopsy technician, crime scene technician, criminologist, detective, fingerprint technician, forensic technician, dispatcher, and more. To learn more, please visit the Forensics/CSI Program page. Mr. Hall says, "The goal is to open students' eyes to the different types of careers within forensic science. It's not just the CSI you see on TV. There's a lot more to it than that."

In addition to the community partnerships the law enforcement programs enjoy with Coolidge and Casa Grande police departments and the Pinal County Sheriff's Office, students can look forward to guest speakers from the Maricopa County Attorney's Office and an Arizona Supreme Court Justice. Mr. Hall has also lined up partnerships with the Department of Public Safety Crime Labs in Tucson and Phoenix. The community can look forward to seeing Mr. Hall's students at schools and community activities such as Meet McGruff and child fingerprinting events.

The forensic/CSI program will work with the local police Explorer program and collaborations with other CAVIT programs. For example, Mr. Hall plans to partner with CAVIT's dental science program to get a look at odontology (the study of teeth) and how teeth can be used as a means of identification and evidence in a crime. With CAVIT's fire science program, students will learn how to approach an arson investigation, including how to process and read a scene. Mr. Hall also hopes to familiarize his students with other aspects of forensics/CSI by partnering with the cosmetology department and the new drone technology program. Mr. Hall says, "CAVIT is on the rise. We've doubled the programs we have. We are an innovative school and looking to the future. It's very progressive, and that's encouraging. We're not content with the status quo and always looking to be better and advancing on the foundation CAVIT has already built."

Students enrolled in the forensics/CSI program can look forward to hands-on experiences processing and reconstructing mock crime scenes. Mr. Hall says, "We're going to be looking at all those different ways to process a crime scene. We'll start basic, and as the year goes on, we'll get more advanced. Ultimately, we're preparing for the SkillsUSA competition, where we'll compete against other technical schools in the state. Hopefully, we'll do well there and go on to the regional and national level." Among other subjects, students will also receive firearms training and arson investigation training. There will even be a section on serial killers and the clues and evidence that helped investigators put them behind bars.

Mr. Hall is looking forward to bringing his experiences and imparting his knowledge with CAVIT students. He hopes to instill a positive outlook on the criminal justice system and law enforcement profession.

There are always lots of great things happening here at CAVIT, so check back frequently to see the latest news and enjoy our student's successes and progress. Check out our other news resources:

Miss a newsletter? We will post them below for your convenience.